This ClimateWatch Trail is within a managed IPA, participants must be accompanied by a local indigenous guide. See below for booking information.

In a continuous cycle that has perpetuated itself for hundreds of generations, over thousands of years, Gunditjmara Elders retell the knowledge passed onto them by their Elders about the fires that thundered from the ground day and night, and how the head and teeth of Budj Bim, a Creator Spirit, was left behind at that place. Budj Bim’s head and his many, many teeth are still visible in the landscape today, just as they have been since our people who saw the eruptions began telling their accounts of the incredible events they saw. And the rocky, stony, unique landscape of the Budj Bim landscape that we call ―the Stone country or simply ―the stones, come to hold greater meaning as our peoplemastered the new volcanic landscape to establish Kooyang (eel) trapping and farming systems.

Our families formed together to farm quantities of the highly nutritious protein rich meat. We developed techniques of smoking the harvest to preserve it for distribution along extensive trade lines. Thus a highly organized, hierarchical and coordinated society arose, possibly earlier than anywhere else in the world. In more recent times, since the invasion of the white men and their merciless pursuit for land, the stones became a sanctuary for our people. It was on the impenetrable and mysterious stones country, where the white men lost the military advantages of horseback and clear vistas, that Gunditjmara people survived and fought back against the odds of the ever increasing invaders. And when the Gunditjmara people accepted refuge at the Lake Condah Mission, and remained on-country, they turned again to the stones for the Eel, Tupong, Possum and Kangaroo that enabled the Mission’s inhabitants to survive. 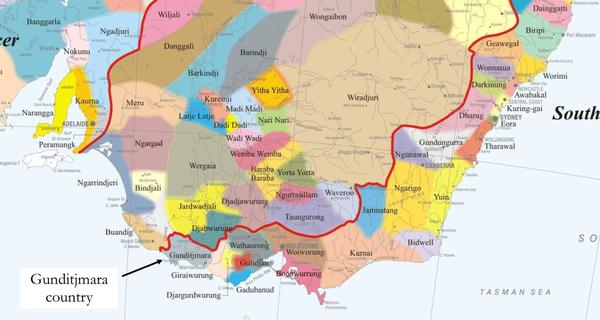 One very dry season, when there was no water in all the country and the animals were perishing of thirst, a magpie-lark and a gigantic crane consulted together.  They could not understand how it was that a turkey buzzard of their acquaintance was never thirsty. Knowing that he would not tell them where his supply of water was obtained from, they resolved to watch and find out where he drank.  They flew high in the air and saw him go to a flat stone.  Before lifting the stone, the Turkey Buzzard, afraid of his treasure being discovered, looked up and saw the two birds.  The birds were so high nad kept so staedy, that he took them for small clouds.  He lifted the stone and drank from a spring running out of a cleft in a rock.  When he replaced the stone and flew away, the two spies came down and removed it and took a drink and a bath, remarking; King gnakko gnal (We have done him).  They flapped their wings with joy and the water rose until it formed a lake.  They then flew all over the prached country, flapping their wings and forming waterholes, which have been drinking places ever since (Dawson, 1881).

In summer when the long grass in the marshes was dry enough to burn, it was set on fire in order to attract birds in search of food, which was exposed by the destruction of the cover.  It is believed the smoke from the buring caused birds to become disoriented; even the wary crow was captured.

Sometimes a waterhole was surrounded with a brush fence, in which an opening was left.  Near this opening, a small bower was made, in which the hunter sat and when the birds came to drink, the hunter would capture birds by passing a noose around their neck.  Pigeons were caught in great numbers this way and as they came reularly to drink at sunset.

It was believed by the Mara that if a Magpie Lark were killed or eaten by a child it would make that child's hair turn grey.  Feathers were used to make a headdress for cheifs clled "Kunnuk wirrin'.

Black Swans were hunted in marshes, wading among the tall redds and sedges, knocking the birds on the head with waddies (war club). When the nullore blossoms, the swans commence laying. The eggs were generally eaten raw, especially by the men while wading in cold swamps, as they believed the uncooked egg kept them warm.  The penalty for robbing a swan's nest in a marsh belonging to a neighbouring tribe was a severe beating.

Lizards and frogs were considered an important food source and were cooked and eaten.

How to get involved

For bookings, please contact the Gundit Mirring Traditional Owners Aboriginal Corporation This email address is being protected from spambots. You need JavaScript enabled to view it.  or (03) 5527 1427.

This ClimateWatch Trail was developed in conjunction with:

See species on this trail