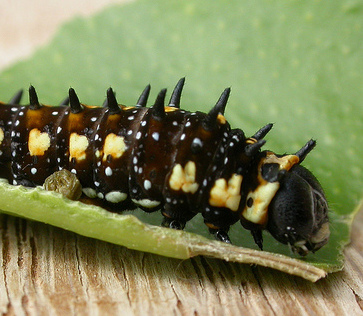 The caterpillar (larva) is initially dark in colour with broad yellow-orange bands running across its body, and two rows of black spines running down its back. Its head is black and smooth. As it matures its body becomes blue-black. Just before becoming a pupa it turns dark green with orange-yellow blotches on its back and some small scattered pale blue-and-white spots. The butterfly (adult) has black wings covered with white-grey patches, and red-and-blue patches on its hindwing. The back edge of its hindwing is scalloped and the tip of its body is yellow.

Caterpillar up to 4 cm long; Butterfly wingspan about 7 cm.

The caterpillar eats the leaves and soft new growth of native and introduced plants from the Family Rutaceae, particularly citrus trees; it will also occasionally eat the flowers and buds. The butterfly feeds on nectar from a variety of flowers, usually feeding while on the wing (like a hummingbird).

If disturbed, the caterpillar reveals a red-orange “tentacle” (known as an osmeterium) from behind its head which emits a foul smell to deter predators.

Usually slow and lazy, although it can take off with great speed if disturbed. It is usually seen in low numbers and seldom stops or rests. Male butterflies strenuously defend their territory; they frequently spiral into the tree canopy in groups of two or three, before separating to descend.

Females lay cream-coloured eggs on the young shoots and leaves of the host plant, and the eggs usually hatch three to four days later. Once the caterpillar is fully developed, it forms into a green or grey-brown pupa attached to a stem of the host plant. The time it remains a pupa varies from about two weeks in summer, to four weeks in autumn, but often those formed in autumn will stay dormant over winter, emerging as butterflies in spring. It flies during the warmer months and there are continuous broods during this period. 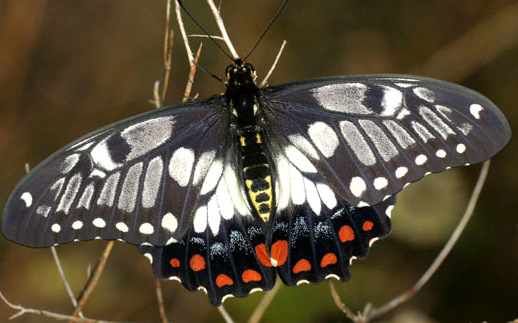 In warmer months, usually from October to May; however, the flying season can be longer in warmer areas such as Queensland. 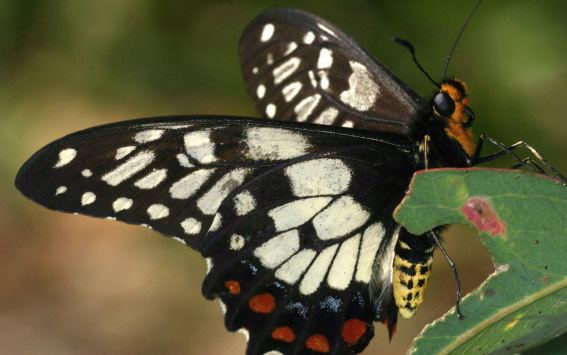 Orchard or Citrus Swallowtail Butterfly (Papilio aegeus), the caterpillar is larger (up to 6 cm long) and lighter green in colour with some pale yellow and brown markings. The butterfly is also larger (10 – 12 cm wingspan) and only the male has black wings, with an arc of creamy-white spots near the tip of each forewing, but not patches over its entire black forewing like the Dainty Swallowtail.

Clearwing or Greasy Swallowtail Butterfly (Cressida cressida) its forewing is transparent with one or more black spots.